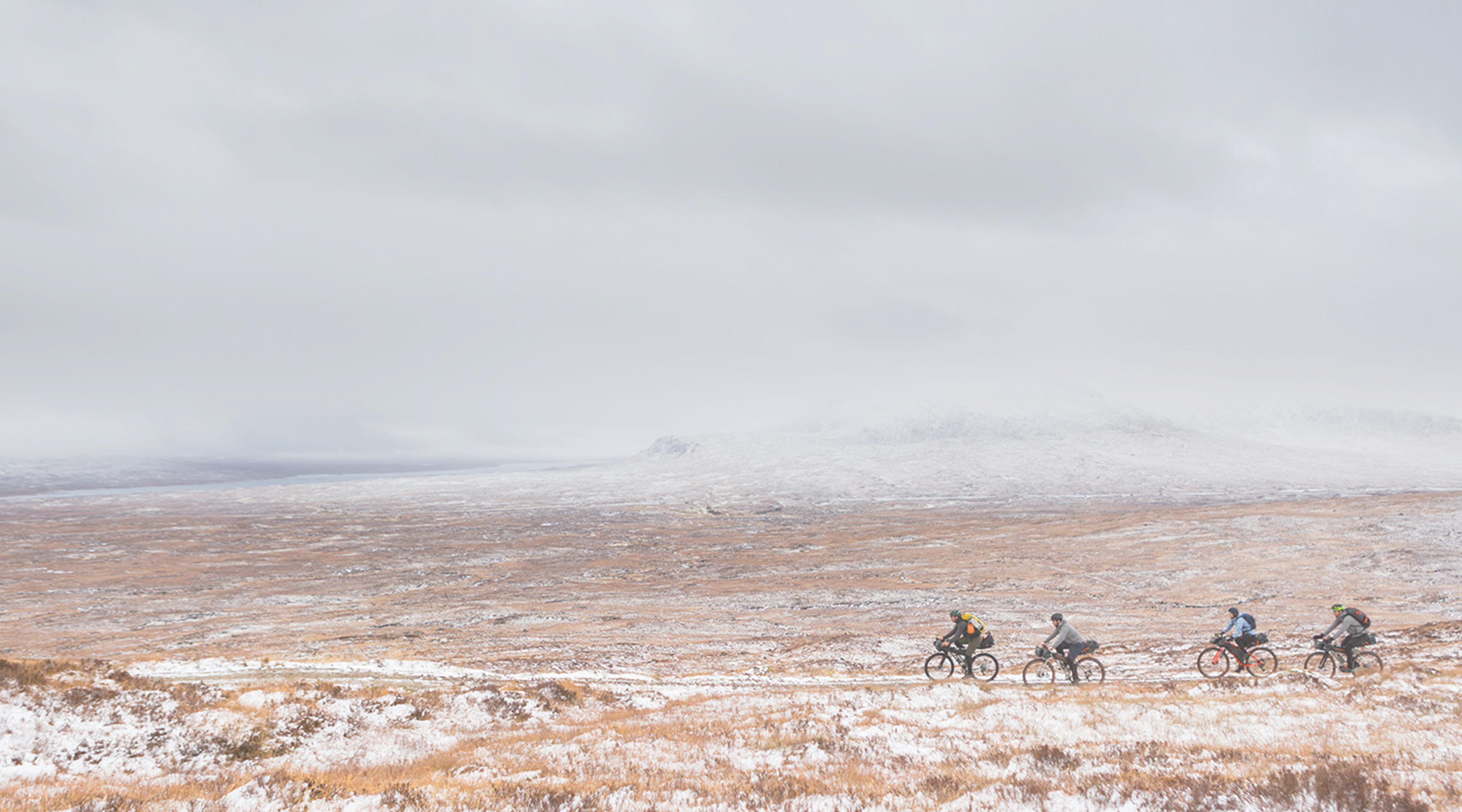 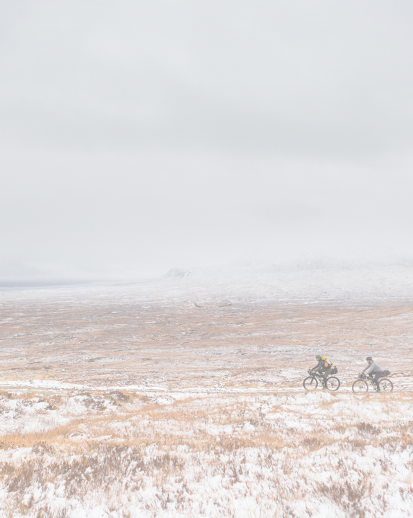 Drove roads of the Highlands

Stefan and David from Pannier takes us on a three-night bikepacking ramble through the Grampian Mountains of Scotland.

Our untouched white ribbon of track meandered across the frozen moorland moonscape from the platform at Corrour – the West Highland Line’s summit station – where the six of us stood, lace-deep in fresh powder.

At 408m above sea-level, Corrour is the highest, remotest station in the UK and it didn’t-half-feel an outlier. There are no roads, just an alluring dot on the map lost in a sea of moor, paths and estate tracks which, importantly for us, included The Road to the Isles – a long-established drover’s road that we would ride south.

Beneath our fresh tyre prints, among the surrounding snowcapped Munro and Corbett peaks, were the hoof- and footprints of the thousands of drovers and cattle that for centuries headed south from the Highlands and Islands to the ‘trysts’ (markets) in Falkirk, across this once trackless wild land.

Our dash to Dalwhinnie Distillery across, through, and over the Grampians was set to be a challenging 84 hours.

At 408m above sea-level, Corrour is the highest, remotest station in the UK. 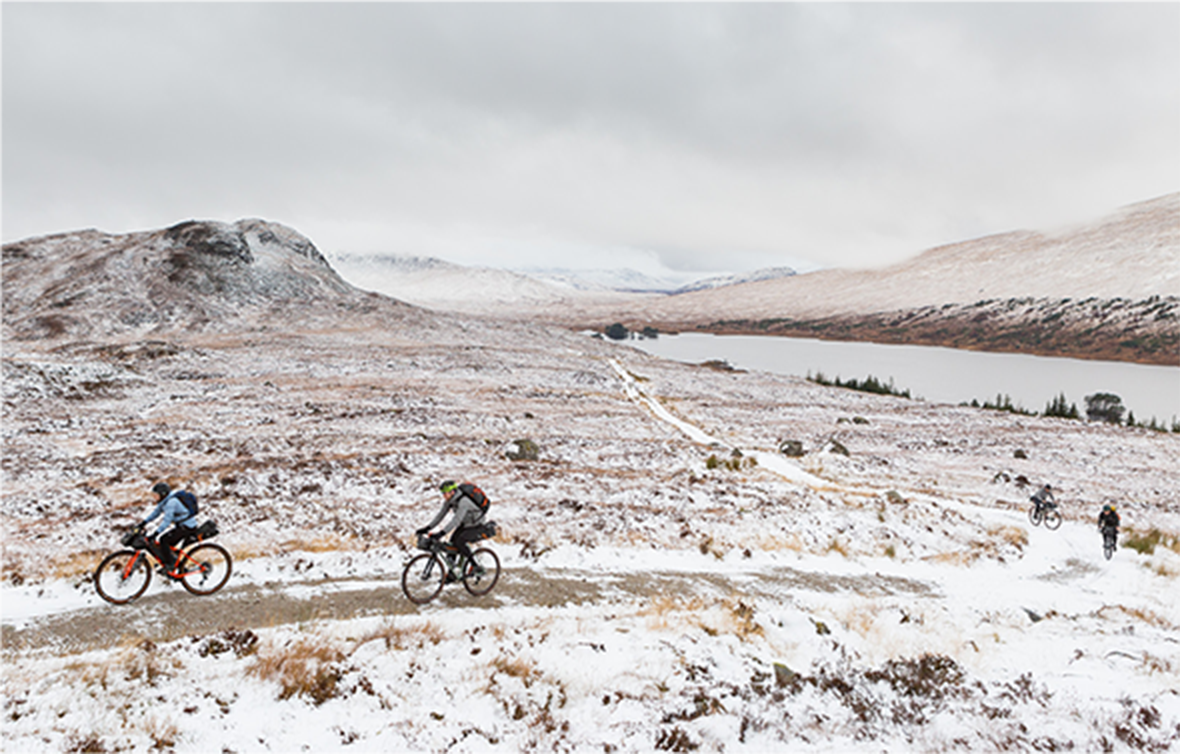 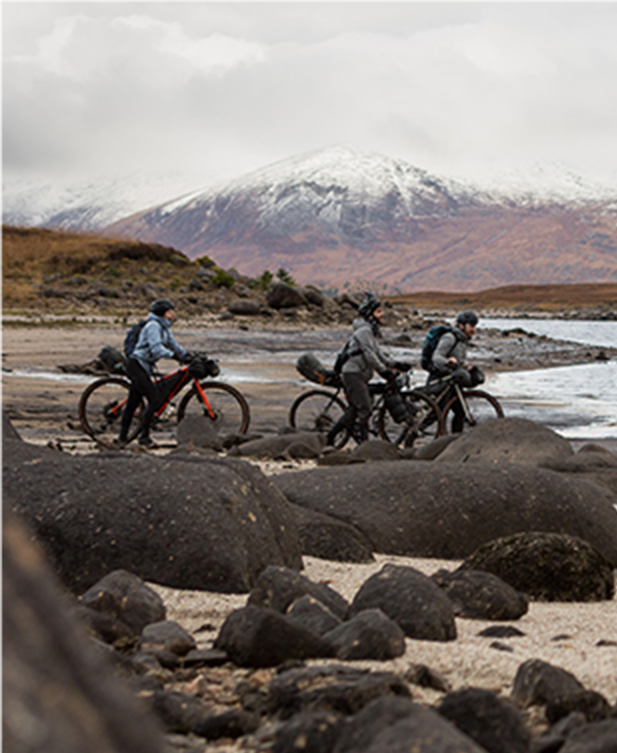 Six of us met in central London the evening before to prep bikes, bags, clothing and supplies before boarding the 12-hour sleeper train to Scotland’s Central Highlands at 9pm. Wintry bikepacking trips pose enough challenges to require sensible planning – adverse weather, slow-going terrain, restricted daylight hours and re-supply can all be restrictions, especially in the void we were heading to, where there was simply nothing. Zilch. Diddly-squat.

Where sporadic cafes or shops were dotted, they were a vast detour or simply shut – out-of-season, out-of-supplies – and where the remote, cosy bunkhouses were, there was nowhere to find food. However, the planning is all part of the fun: route, back-up and ‘shortcut’ options; escape plans; emergency shelter; one-pot meal plans. It’s often a case of carrying-in everything you need for long days in the mountains and we were used to it by now, happy to stuff packs full of oats and Nutella, mackerel and parsley, gnocchi and pesto, coffee, single-malt, and a couple of emergency-dehydrated meal packs. For this trip, I’d settled on meals like traditional Cullen skink, stovies and cranachan from an old Highland cookbook, semi-visualising where we might group-cook while jotting the ingredients down in my tour journal. 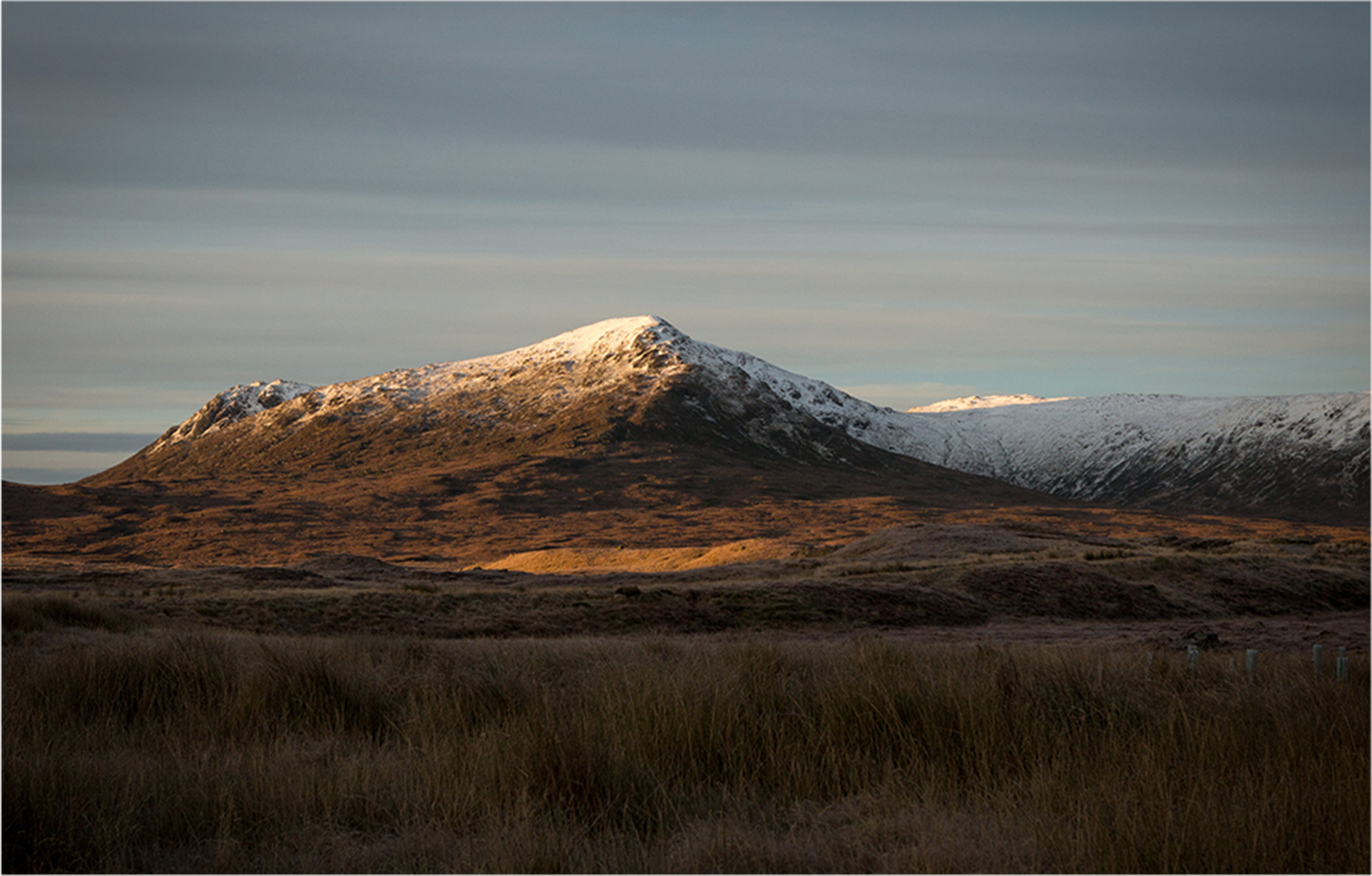 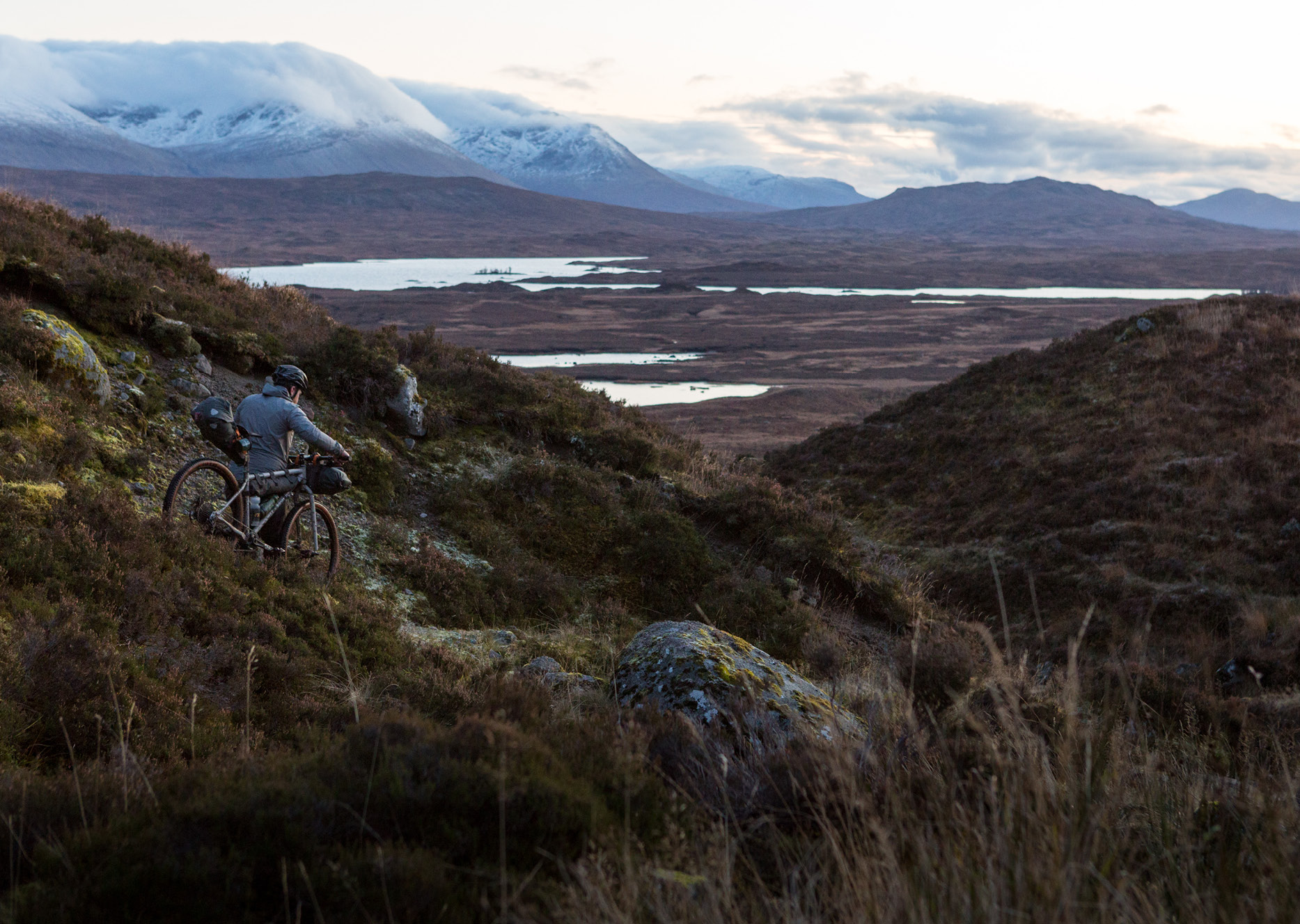 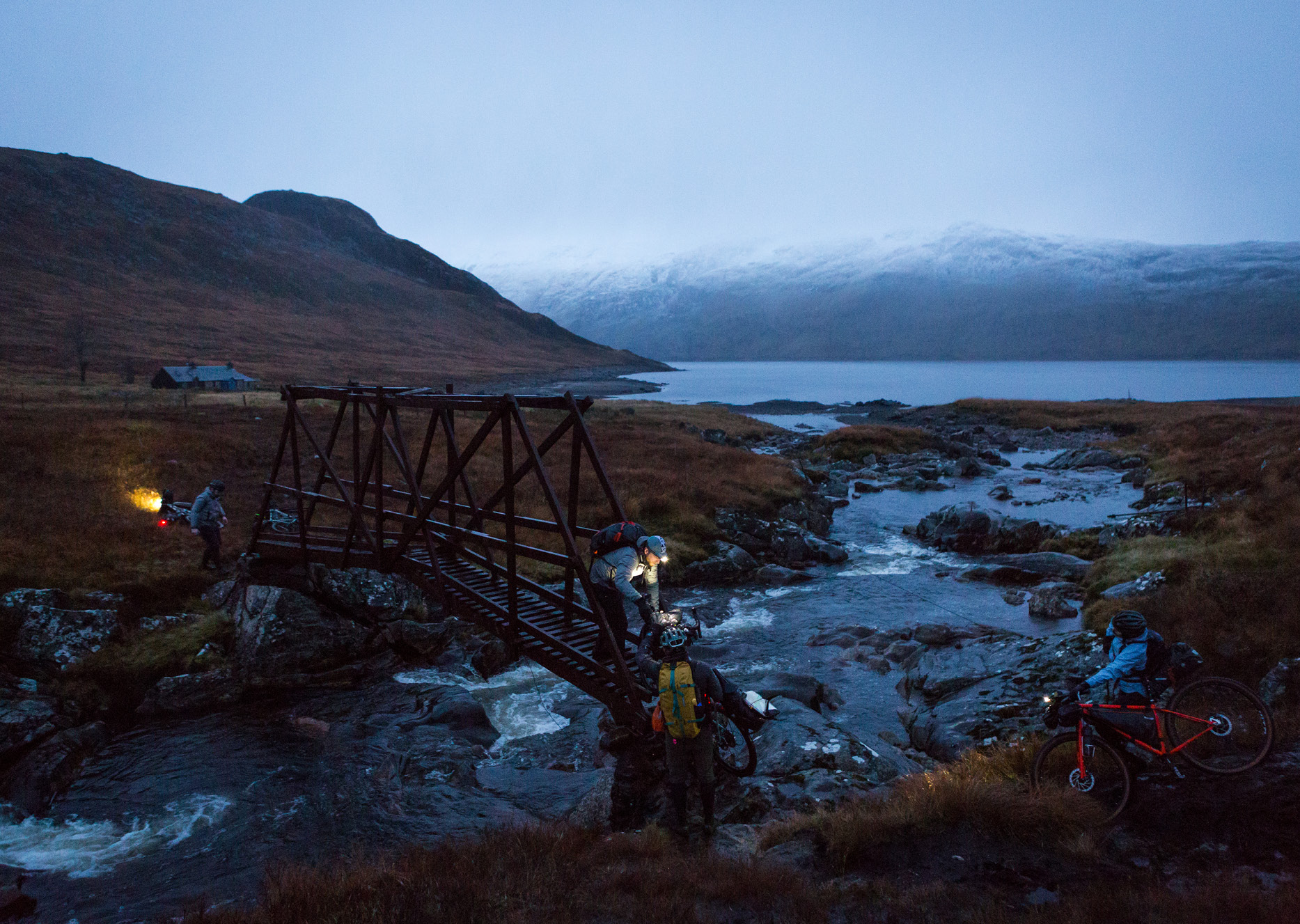 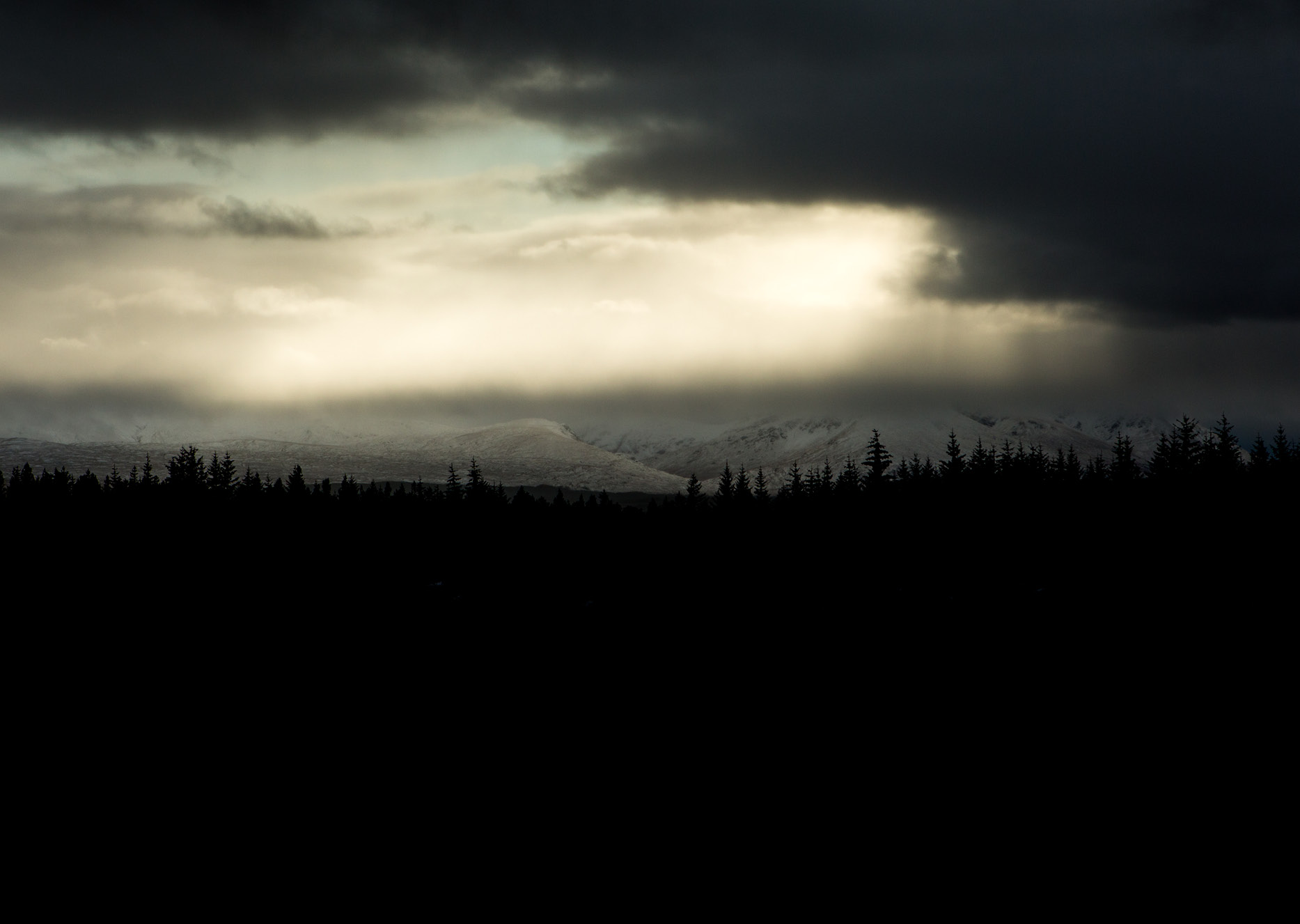 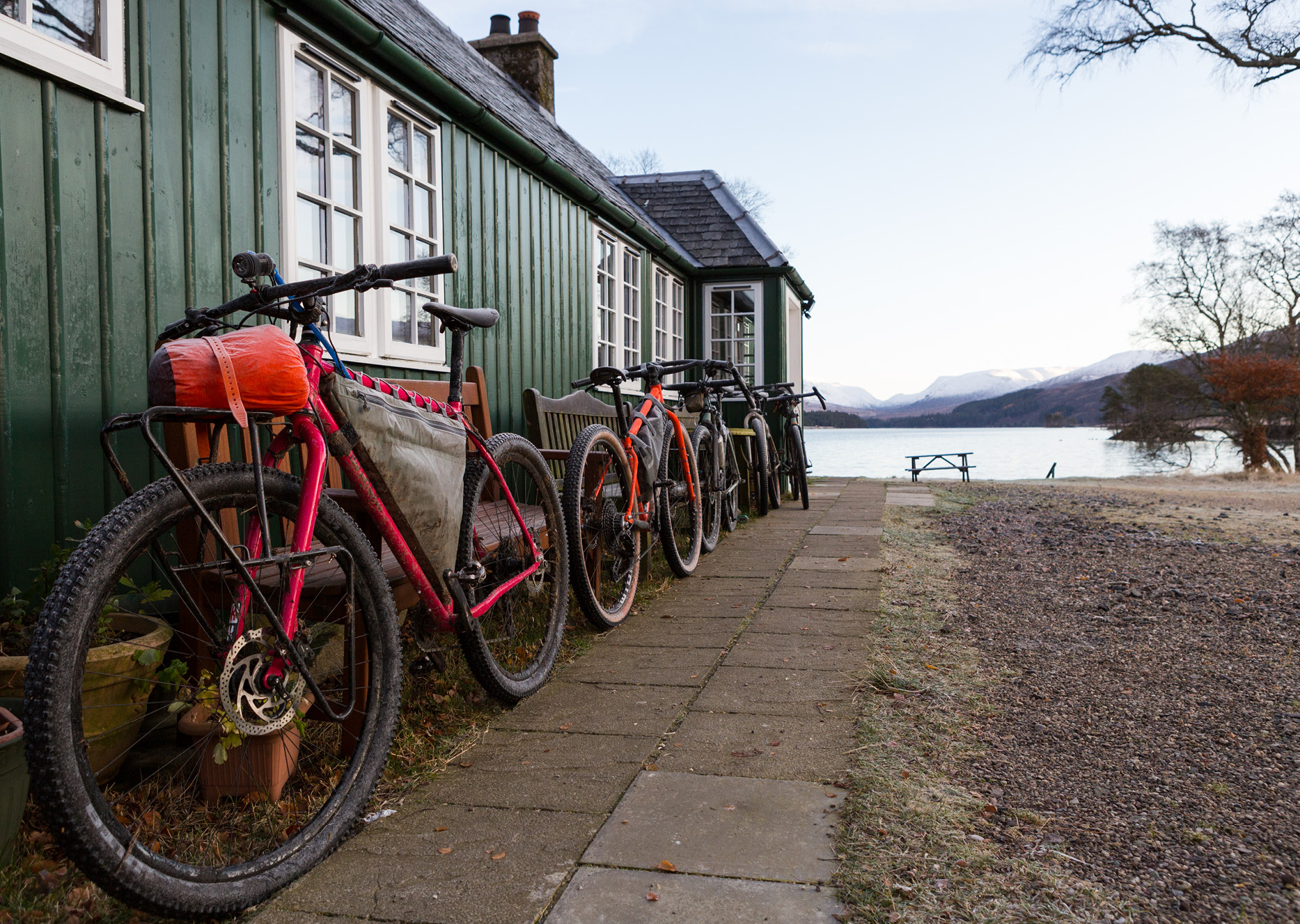 The plan was to ‘go for a walk ride’ through the wintry, gloomy Grampian Mountains of Scotland. To track the north-south drove roads and, in true drover style, explore the alluring voids in between. After alighting the sleeper train on Monday morning, we then had another booked back from Bridge of Orchy on Thursday evening. Our squad of six was made up of Brother Cycles’ Will, friends Jordan and Taylor, filmmaker Luke, my Pannier colleague Dave and I.

The aim was to test some route options for our new Highland Drover bikepacking tour, put Brother Cycles’ new Mehteh all-road/gravel bike to the test and, ultimately, make a film of our exploits. As with all our Pannier Tours, this journey wasn’t about kilometre-krushing, we were keen to embrace the spirits of vacilando – an untranslatable Spanish term for the act of wandering when the experience of travel is more important than reaching the specific destination – and the Highland Drover, a person whose occupation it is to drive cattle and sheep. Once a vivid and vital part of the life of Scotland, peaking in the 150 years between 1700 and 1850, droving often meant long, slow journeys through the remotest, untracked area of the Highlands.

Obviously, our plan didn’t go to plan. We blamed Mercury being in retrograde, which actually made for three nights of fantastic full-moon light. But, that’s the name-of-the-game with a reconnaissance trip: every one kilometre was two; every hour flew by in half-an-hour; every track we thought might be rideable wasn’t; every one metre of peat bog was actually ten. Our Dalwhinnie Distillery dream was over by about 15.00 on day one. The light faded, the rain hit from all angles, the peat bog route around Loch Ericht lengthened by the minute and Benalder Cottage bothy, beneath the imposing dusky silhouette of Ben Alder, was too well-placed by the time darkness fell to not take shelter, start the loch-side cullen skink bubbling, and get as-cosy-as-possible for the evening. 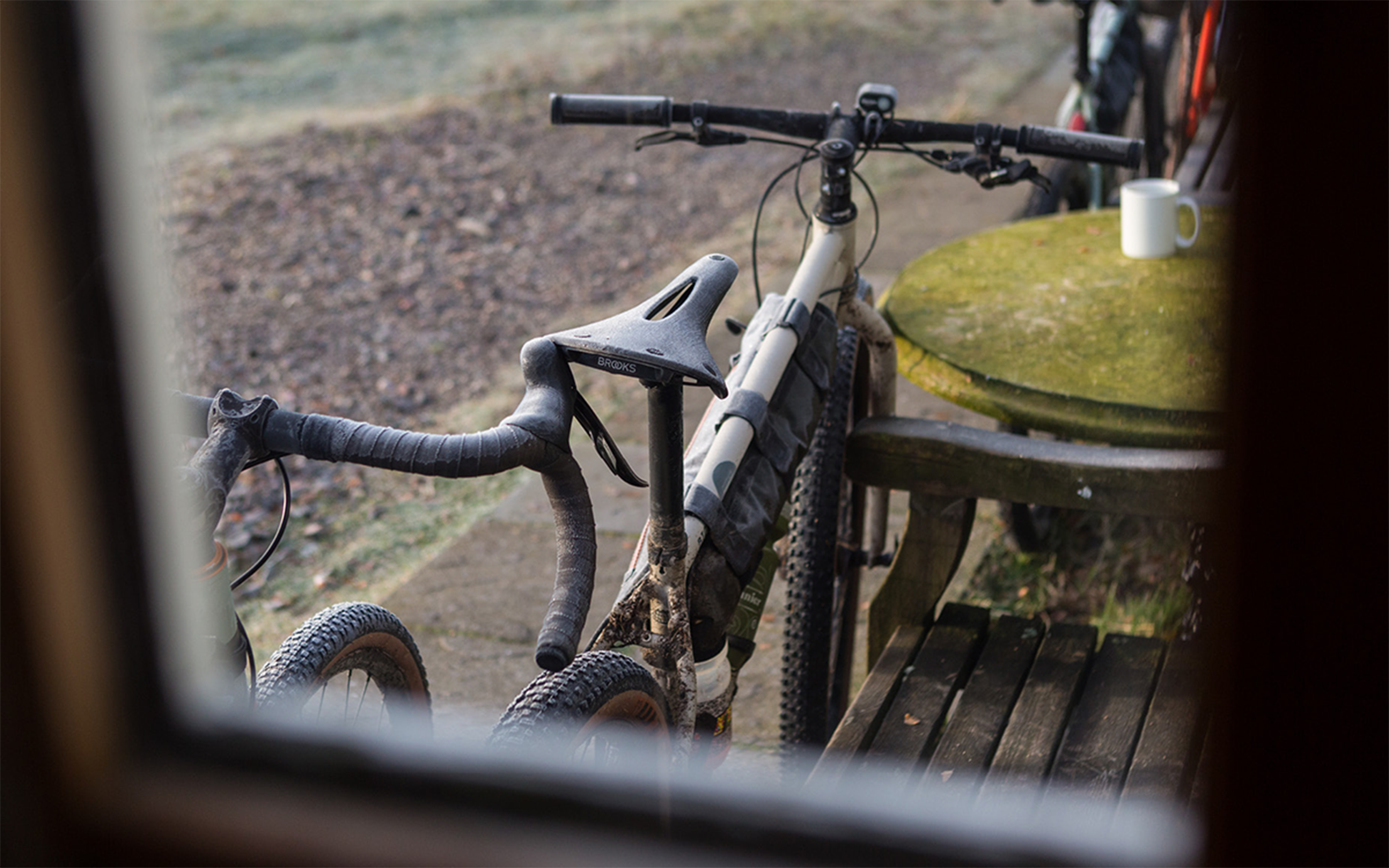 The Cambium C17 Carved features a hole for pressure relief and additional flex, eliminating contact points which cause discomfort for some riders. 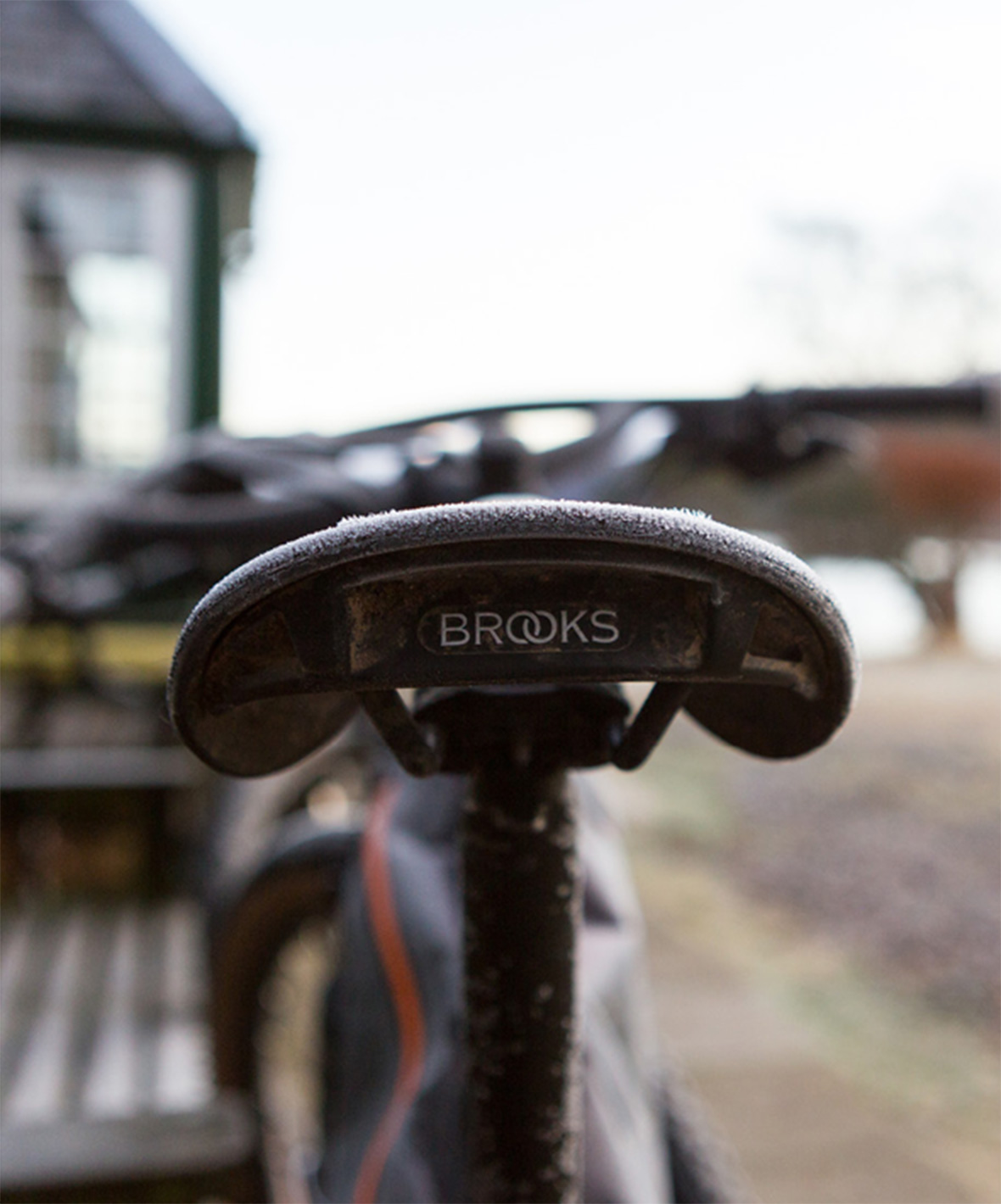 The Cambium All Weather C17 is made for freezing rain. 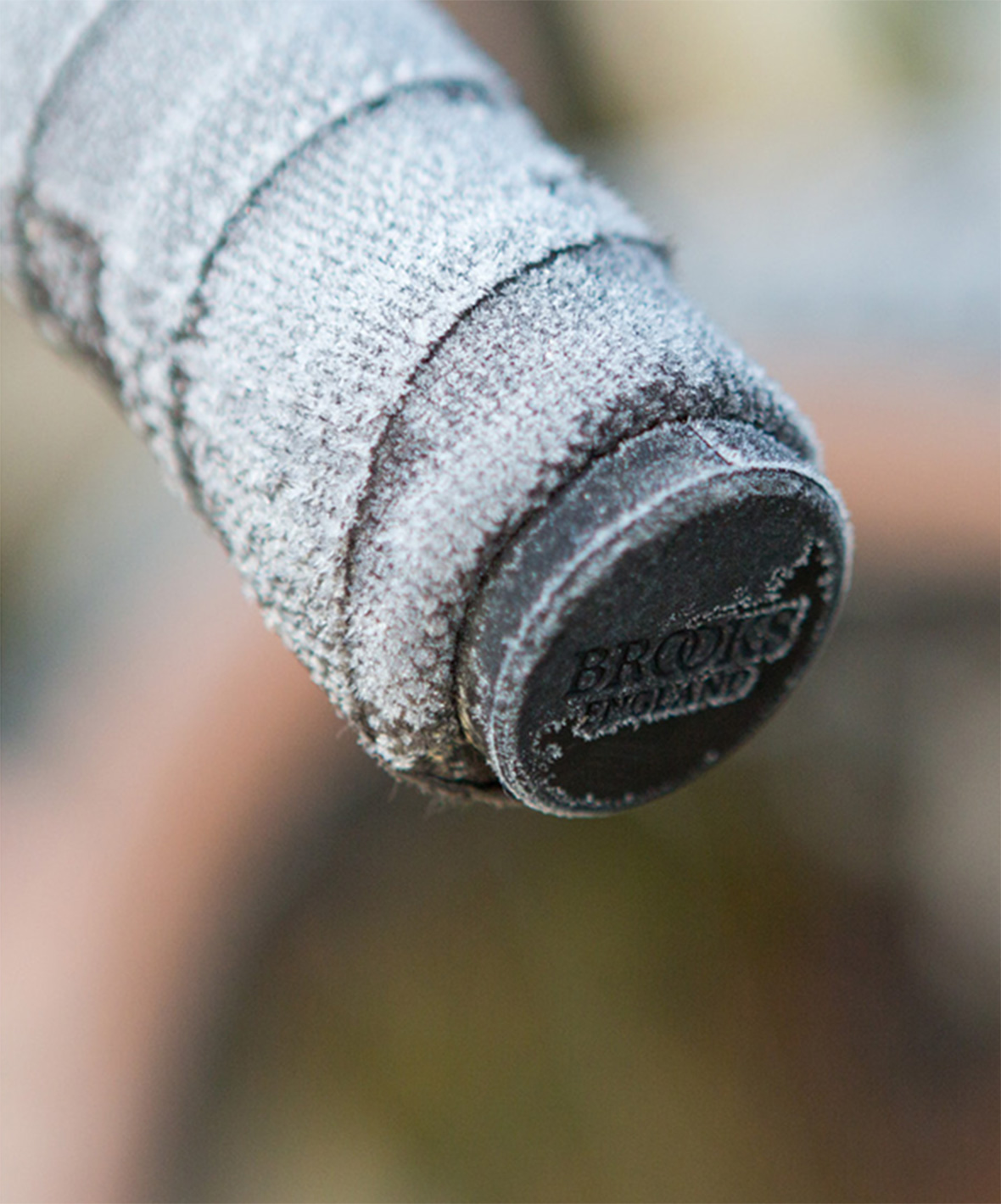 The Cambium Rubber Bar Tape has excellent grip in all weather conditions.

Re-checking the OS map in the light of a head torch, Loch Ericht’s western shore was actually 30km long, and after trying the next morning to skirt along the path, things weren’t looking great: steep, wet cliffs and overgrown less-than-single track. Once you’re immersed in the map, among the mountains, wringing socks, drying gloves, laughing – sometimes crying – about certain sections from the day, it’s much easier to picture the next few metres, let alone kilometres. There is no way the group could have conquered the continuing loch-edge track the previous night. Alder Burn would be our dead end. I made the decision to head back to the sanctuary of the Corrour Estate and the Loch Ossian Scottish Youth Hostel Association. From there, we’d cross the infamous “thorofare of thieves”, Rannoch Moor, overnight at one of the most historical drover and traveller intersections – Kingshouse Inn, Glencoe – before heading south on the stunning West Highland Way gravel tracks to Bridge of Orchy: our ticket back to civilisation.

Connecting-up un-connectable places; those alluring voids on the map once again proved to forge an incredible 84 hours in the mountains. There is a reason that more established tracks, and now bigger roads, exist through the mountains today – tried and tested routes across once wild, remote trackless lands, resulting from the adventures and hardships of folks like the drovers over the last millennia.

But, the most memorable adventures are always found taking the tracks-less-travelled. That’s why they’re called push bikes, after all… 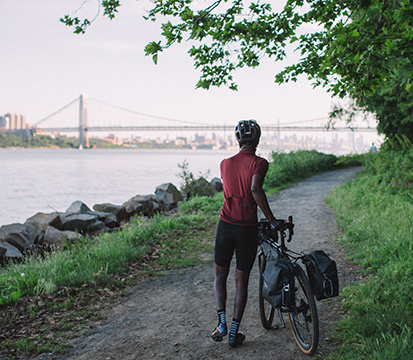 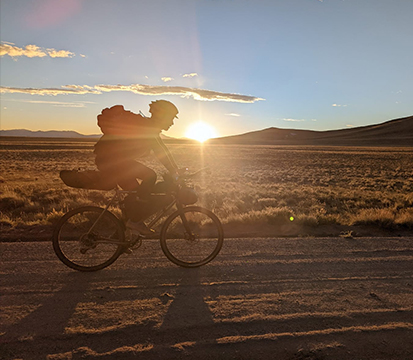