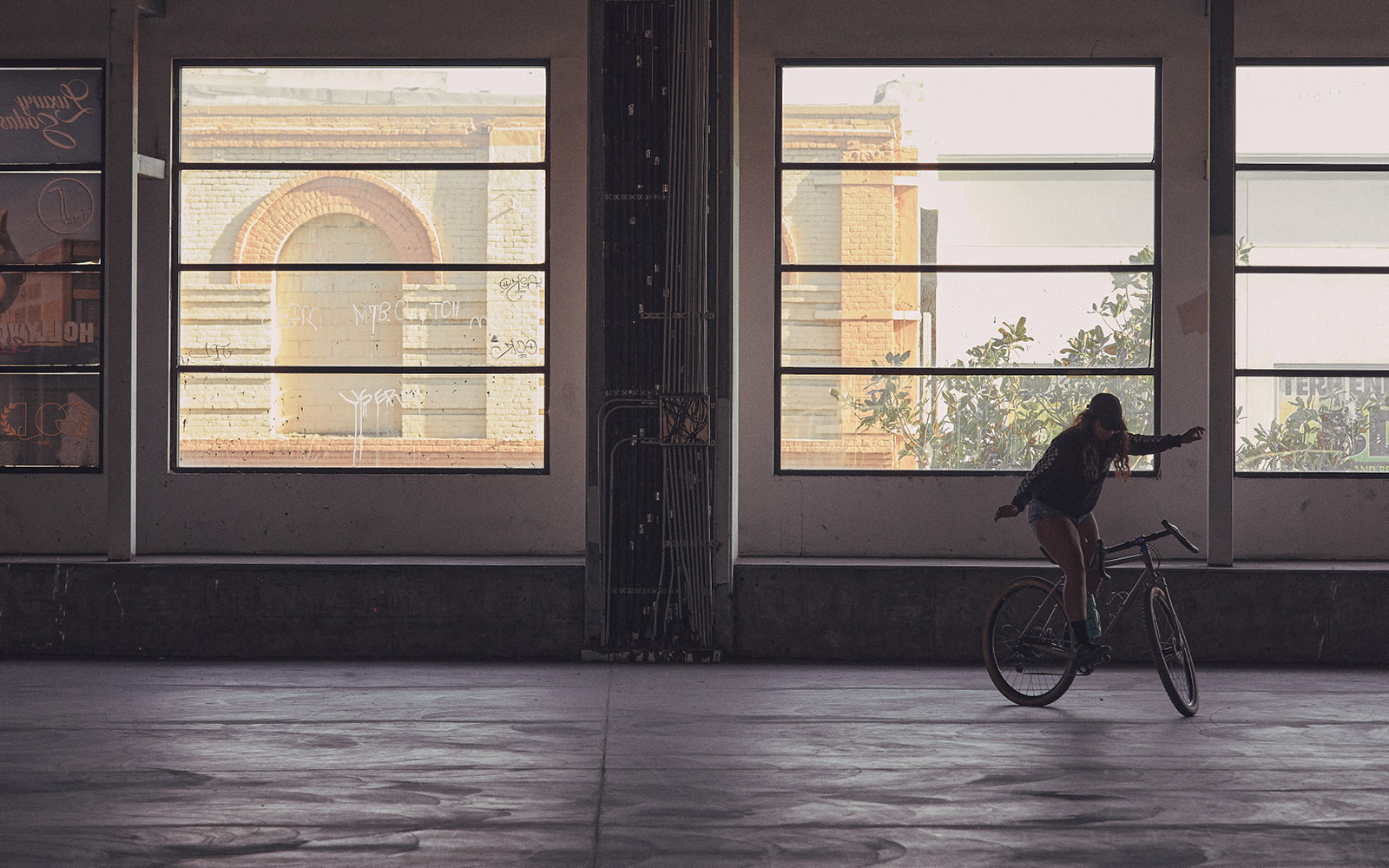 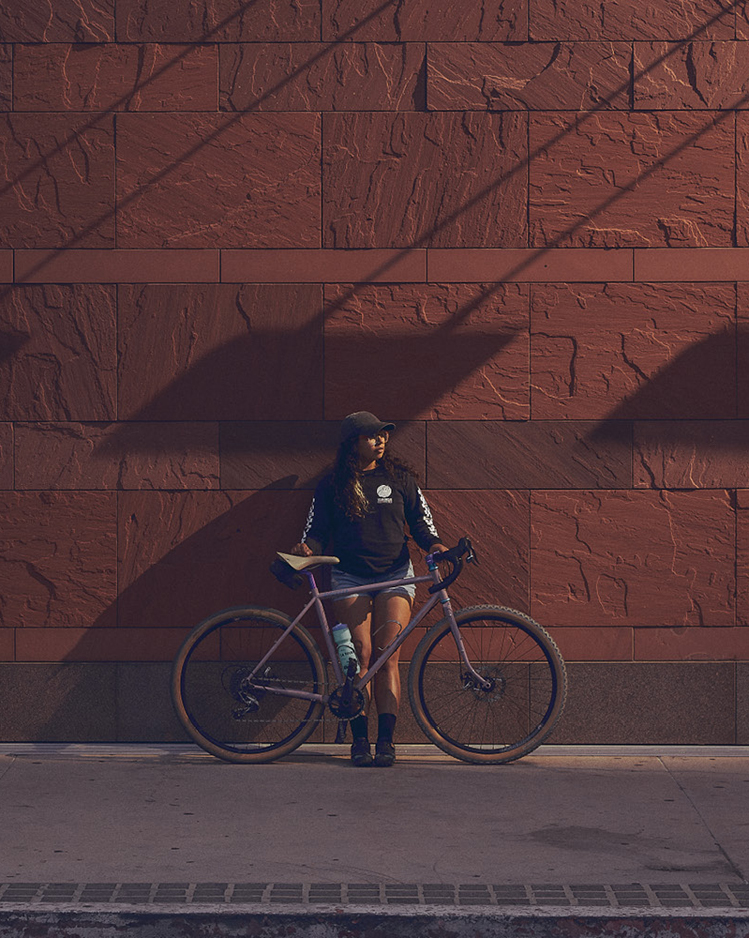 Steph Ortega’s world revolves around the bike industry. Owner and manager of Los Angeles-based bike courier company, PDQ Courier, she’s also juggling two bike shop jobs, doing digital marketing for a local advertising agency and training to become a mechanic. She also finds time to race with Team Brooks, and in everything she does, Ortega challenges the gender disparity in her industry and beyond.

After leaving the non-profit sector and travelling for two months, Ortega started working as a bike courier. She started off on one of the big apps for a short period until moving over to Los Angeles-based courier business, Far West. She made some good friends there, but those early days were not without resistance. 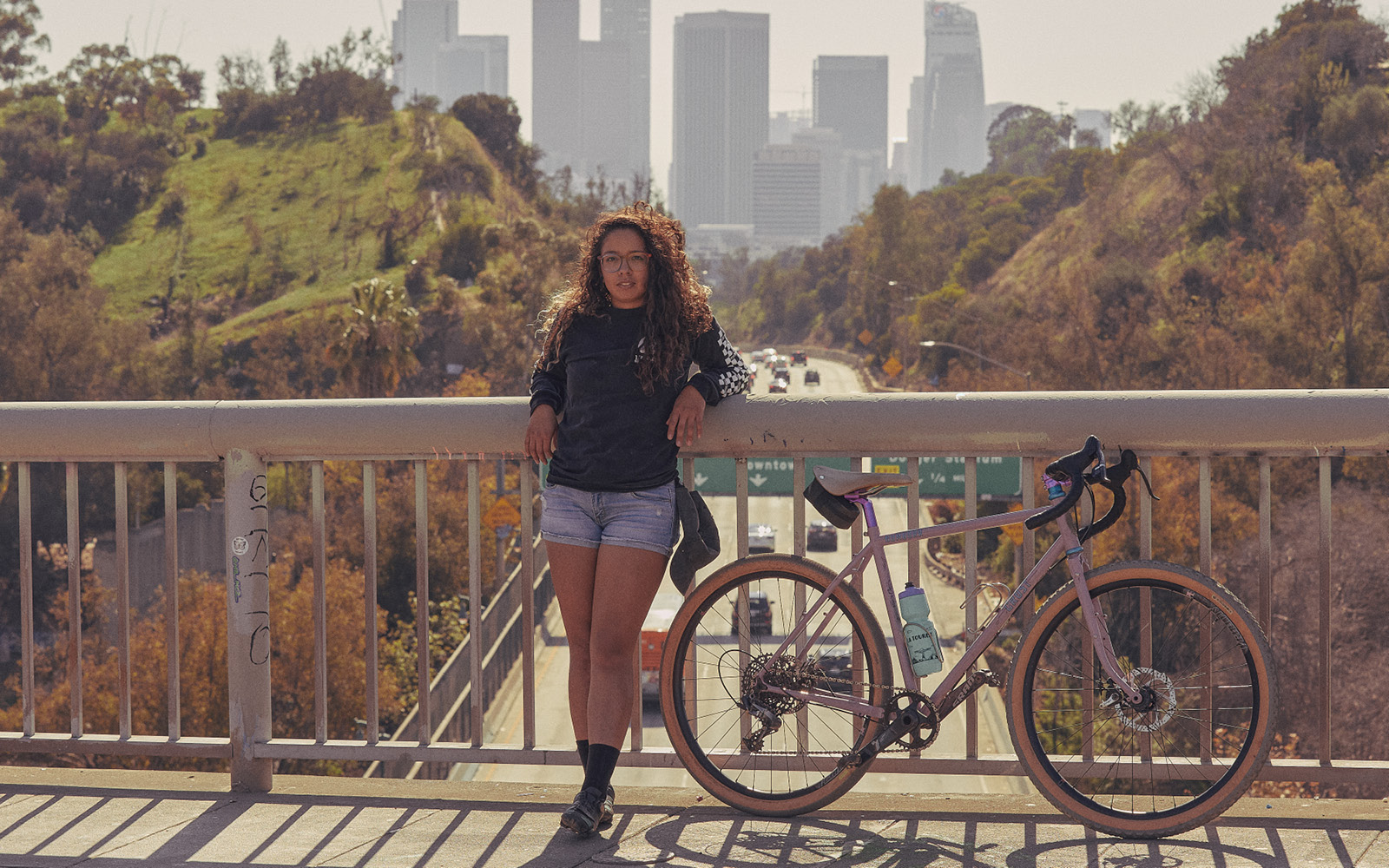 “My friend told me that he didn’t think this work was for me. But I’m the type of person who is very determined and will prove people wrong, so I said, ‘Let’s just see!’ And from there it just went full force.”

Ortega and one of her new courier friends had identified that downtown LA, an area they both lived close to, was lacking in the bike courier department, so after a couple of months working on the west side, they decided to go into business together. At the start, it was just the two of them for almost a year before it began to grow. But it wasn’t enough just to take on more riders.

“The courier business is a male-dominated area and I’ve always had the goal of having a 50/50 women/trans/femme to men ratio, or even more women than men. But it’s really hard to find women who want to do this type of work.

“It’s very hard work and it’s hard on your body. We have to be capable of carrying heavy weight on our backs, and not just that, but we have to ride with it, which can be insane. You’re on a bike all day in all weathers, from super-hot to cold and rainy days. When I started, I was also just getting into cycling. So I went from barely commuting to a full force courier working all day, every day.” 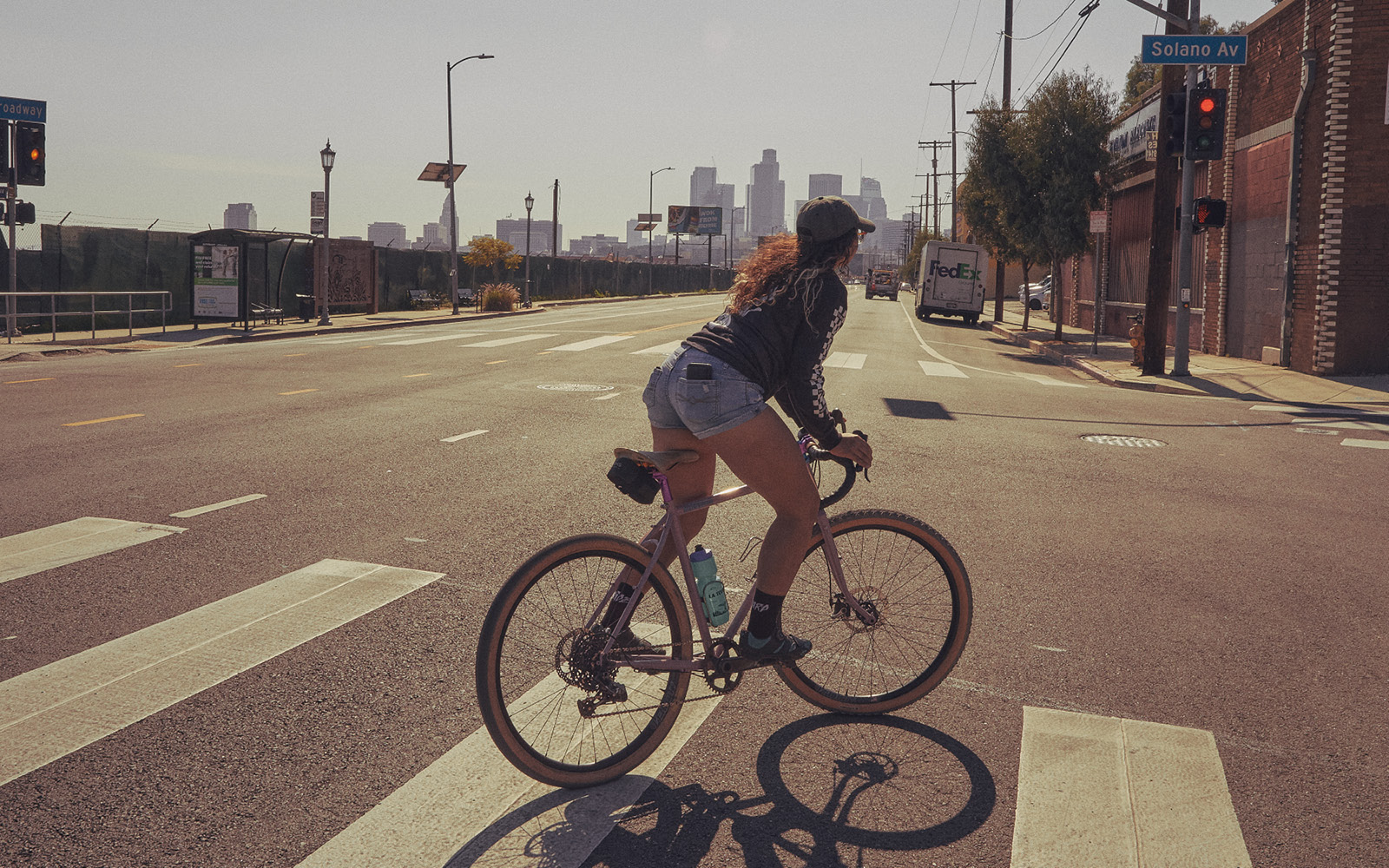 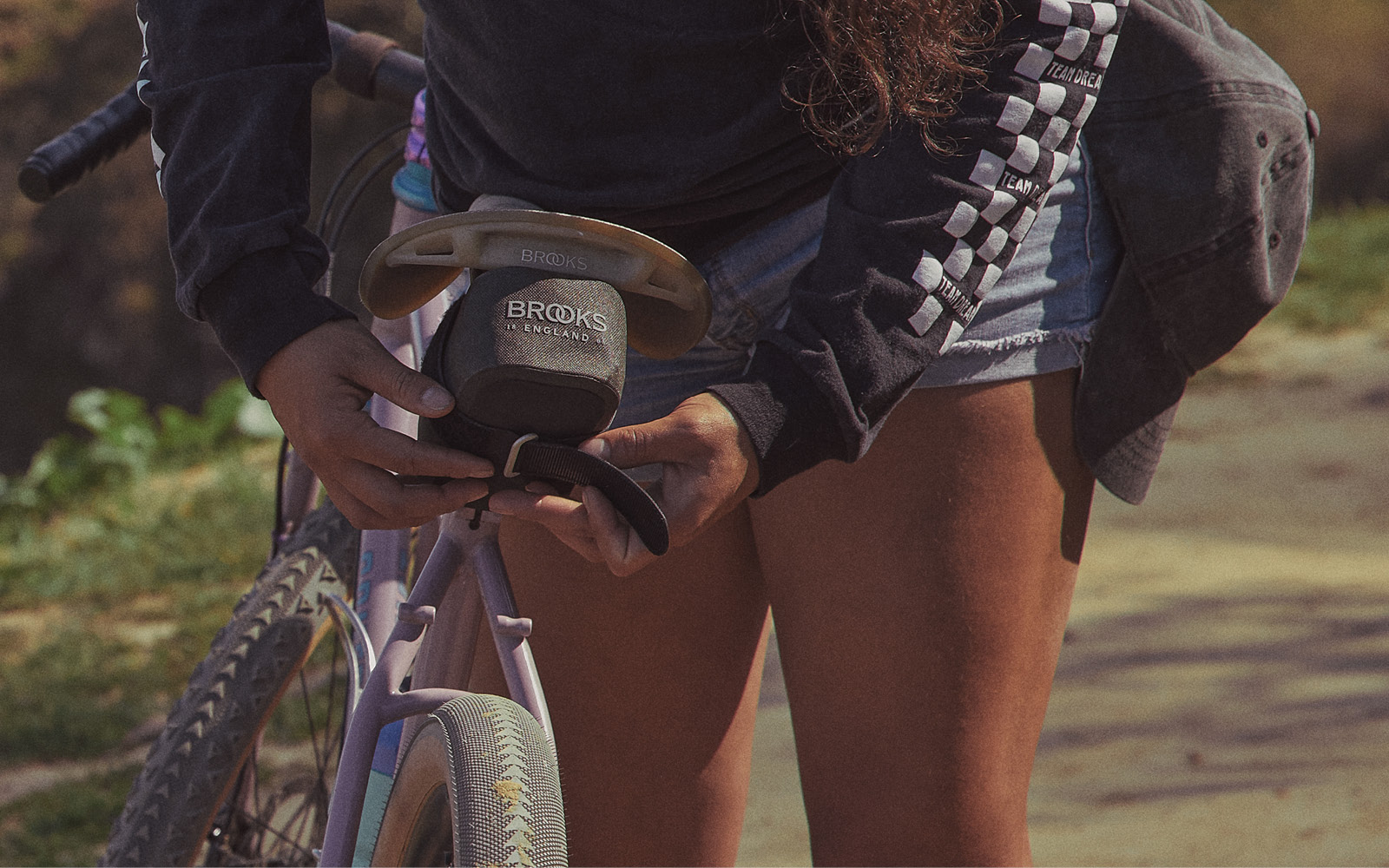 Ortega would like to move over to an hourly system, but for now her company operates on a commission-based business model. In the current setup, it’s difficult to maintain stability, both for Ortega – now that she’s managing a team – and for the riders themselves. There are also the big apps that have taken over, not to mention the recent impact of Covid. However, PDQ Courier is still hanging on with the promise of better options for their customers.

“There have been times when we’ve been at almost 50/50, but the women who’ve worked here want more stability, a more steady income, so they’ve come and gone. At one point I had four women to seven men – I was getting close! But it’s definitely hard work, and the income you get from this is not that great. You almost have to have the right living situation already to afford working this kind of job.” 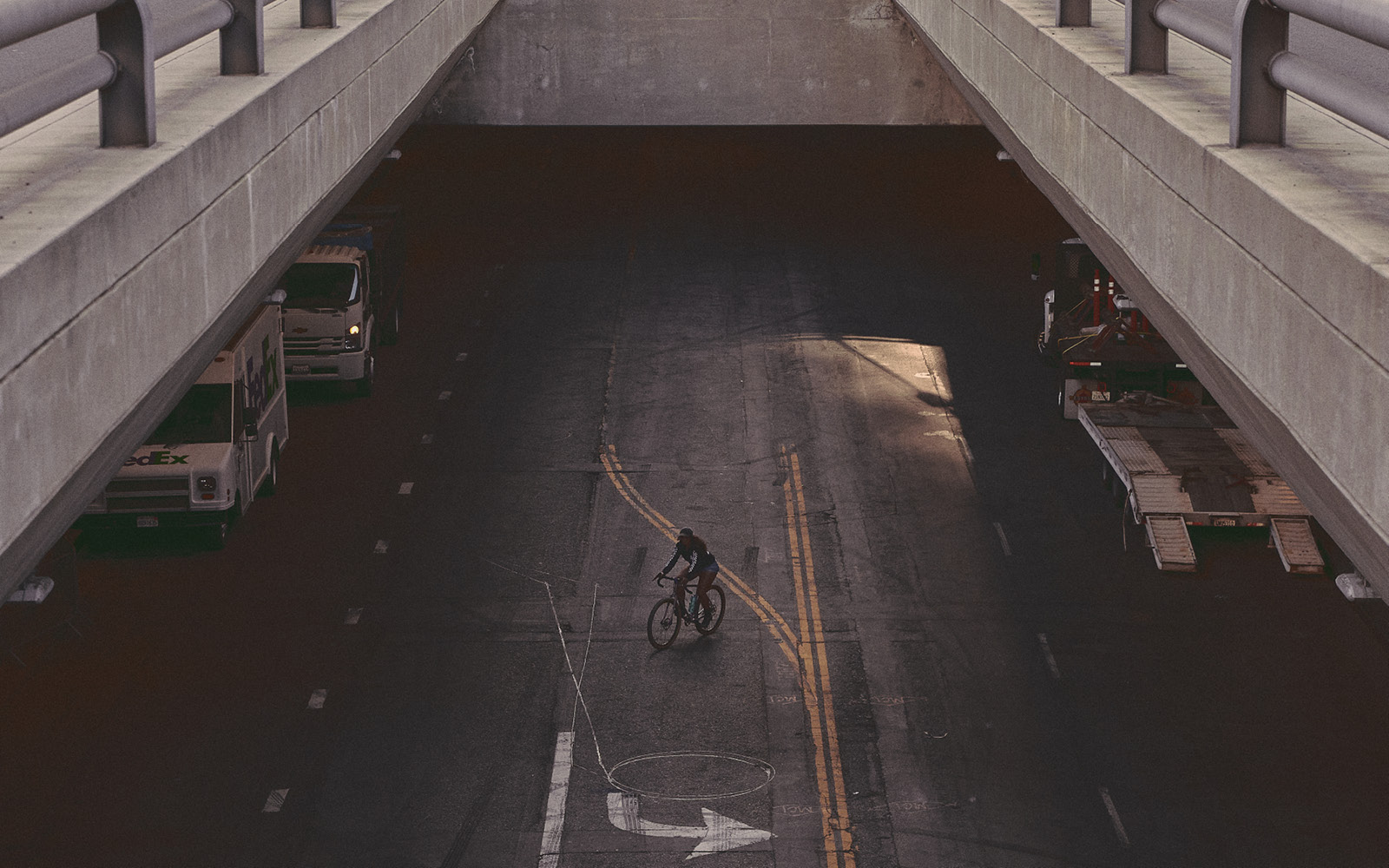 Like so many things bike related, Ortega has found that, for herself and her fellow couriers, it’s about so much more than just a job.

“It’s community-based work. Obviously, money is key for a lot of people, but I think a lot of us like the community feel, just riding through the city. It is possible to make good money as a courier, but people like it because you’re not clocking in, it can be good fun, and you can make more money somewhere else if you need to.”

“It’s community-based work. Obviously, money is key for a lot of people, but I think a lot of us like the community feel, just riding through the city. You can make money somewhere else if you need to.”

In the five years that Ortega has been running her PDQ Courier, her role and her everyday life have evolved quite dramatically. In the beginning, she would work double shifts ‘in the field’ to make sure orders were getting done and then get through the backend stuff once she got home: invoices, accounting, marketing and emails, etc. But now she spends very little time in the field. Now she balances the backend with other ambitions in order to work towards a better living situation for herself.

Currently, she is working at two bike shops while training to be a mechanic and doing digital marketing for Nouvel Âge Media. And there’s still her own business to consider. PDQ Courier has a system which integrates the orders, and the team can then pick and choose, ‘self-dispatching’. There’s also a dispatcher on hand when Ortega is not able to answer the phone or enter jobs, and any issues will come through to her by text or email throughout the day which starts early and finishes late.

“I think my work ethic comes from my dad. He’s always been a hard worker and he instilled that in me. Instead of living check by check, the goal is to be able to spend money without having to budget yourself. I think he always had that idea and he’s done it for himself, so now I want to do the same. You don’t ever want to struggle or have to think if you have enough money.” 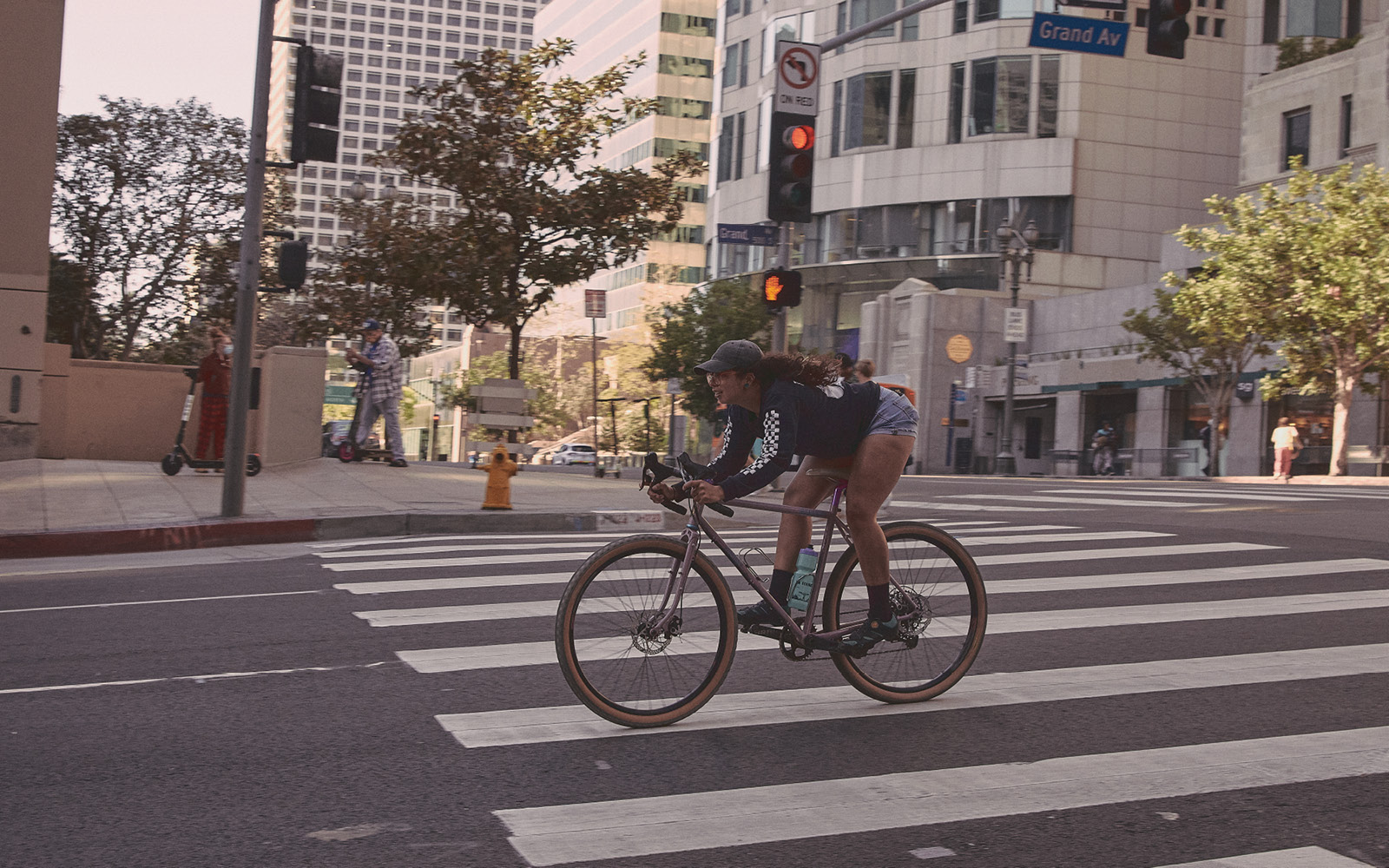 Ortega is not just personally ambitious, she also sees ways the world around her needs to change. That fire has burned in her since she was young.

In her efforts to become a mechanic, the first bike shop she tried weren’t able to provide her with the opportunity, preferring that she focus on sales. But then she found Let’s Ride Cyclery.

“Obviously, training someone from zero is time consuming. I’m just stoked that someone would take the time to train me and believe in me, and not disregard me as a woman mechanic.

“I’ve always pushed myself into the gender gap, forcing my way into positions or hobbies that are typically a man’s area. When I was young, I started skateboarding and I kept being drawn in because you wouldn’t see that many women there. Then I went to biking, and as a courier you still get resistance, or you’re asked if you need help.

“I’ve always pushed myself into the gender gap, forcing my way into positions or hobbies that are typically a man’s area. When I was young, I started skateboarding and I kept being drawn in because you wouldn’t see that many women there.”

“I really do think that we need more women in the bike industry – trying to be a mechanic you see it as well. I think sometimes you just have to have a hard skin. The more women who try and get into these positions, the easier it’ll be for others in the future.”

“I really do think that we need more women in the bike industry. The more women who try and get into these positions, the easier it’ll be for others in the future.”

“In the future at Let’s Ride, we’re going to try and do some workshops specifically for non-cis men, and when I have a better knowledge, I’d like to lead some of those classes for non-cis men too. I think that’s a great way to move forward and encourage other people to do so too.” 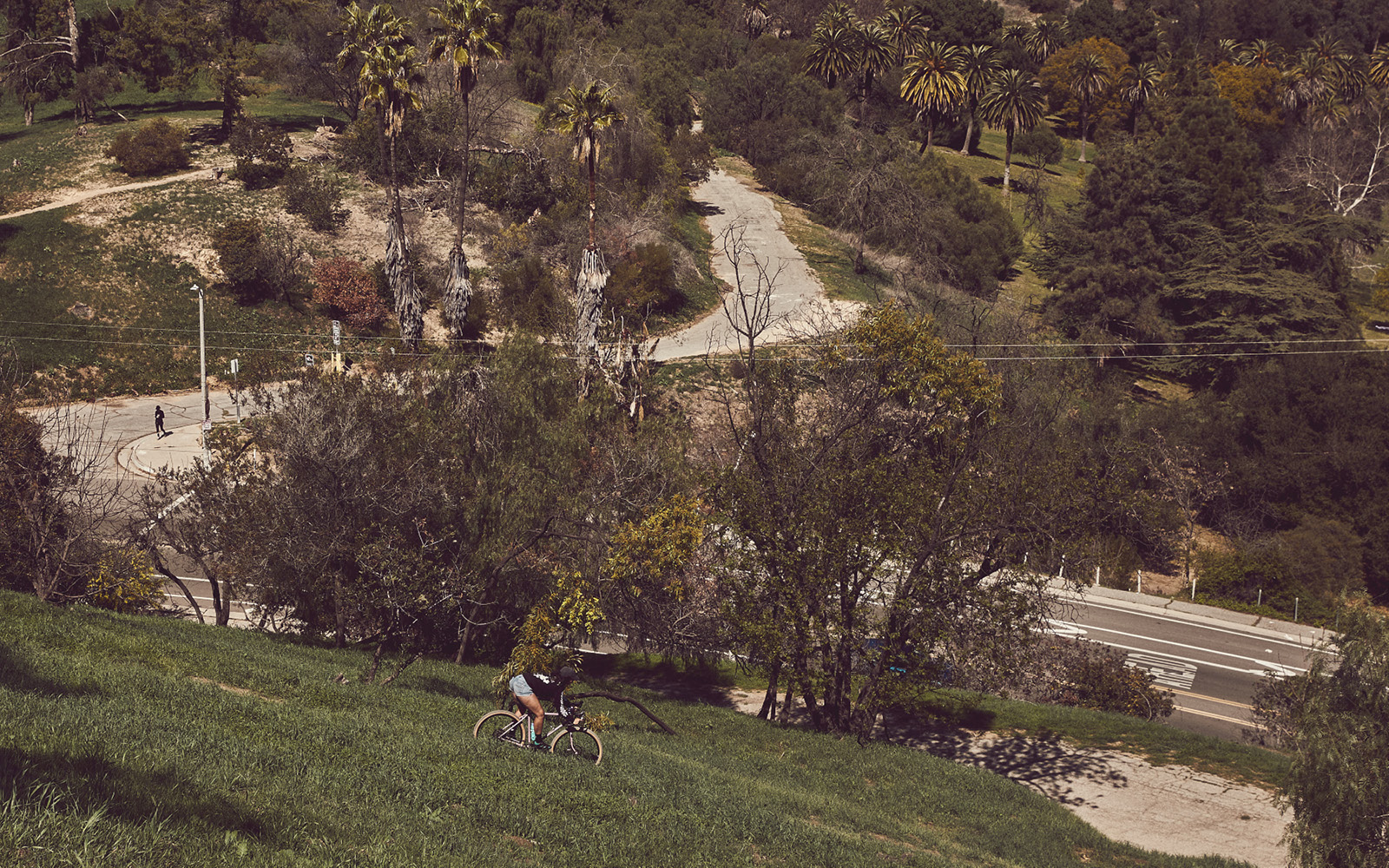 For the past few years, Ortega has also been involved with Team Brooks. It has proved yet another means of driving visibility in a white male-dominated sport.

“I got lucky. Before Grinduro Quincy with Team Brooks, I got a WTF Explorer scholarship to do the Mid South 100 in Oklahoma, another endurance gravel event – WTF paid for the flight and got us a place to stay. I met Arya [Tenzin Namdol] and Sam Scipio there, gravitating towards each other because we are women of colour. As women of colour in the cycling industry we just connected. 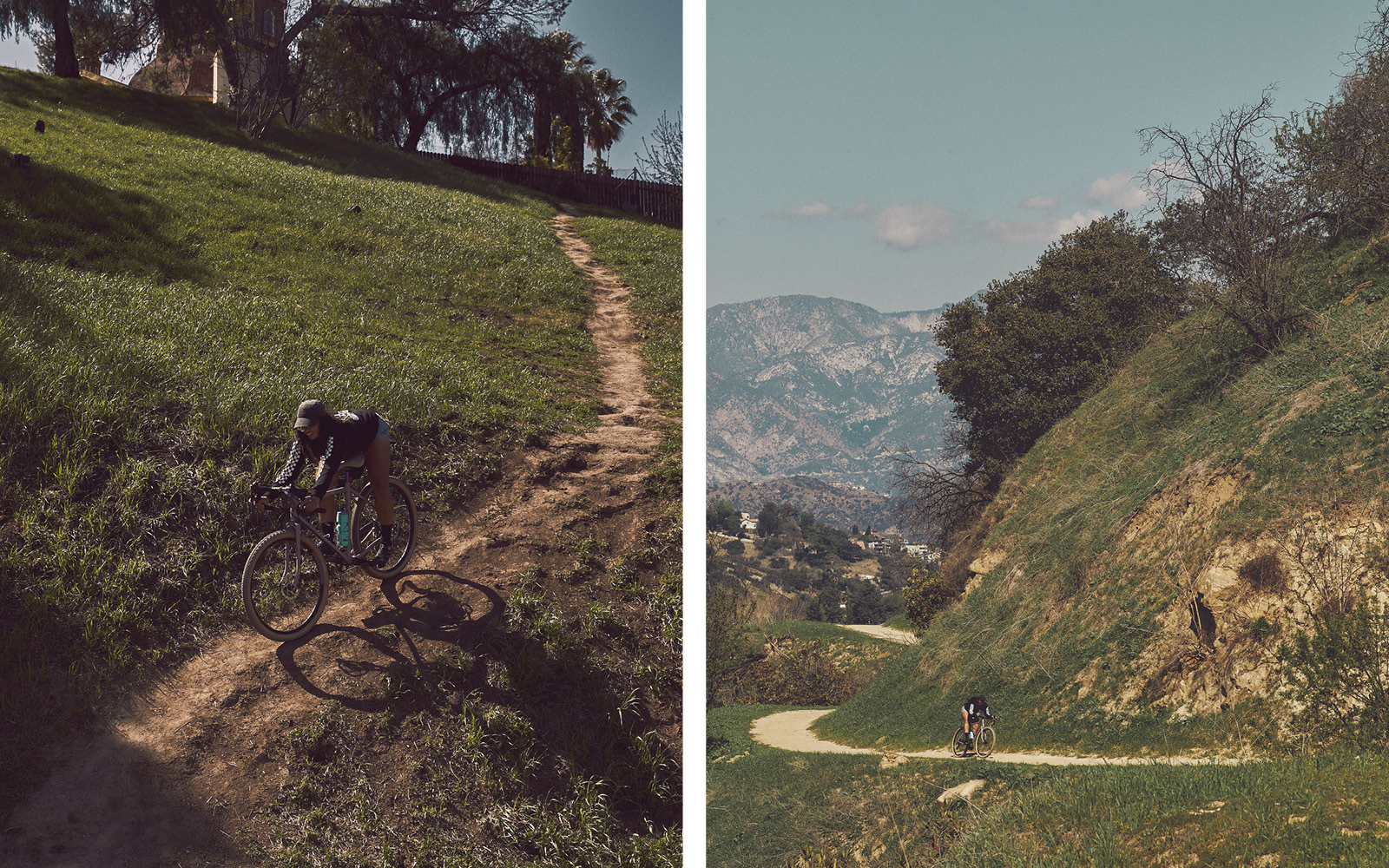 “And with Brooks, Ronnie Romance and Ultradynamico, we had this group of really interesting people. It was nice to see such huge diversity on our team, a team with different goals to many of the other more picturesque teams. I was running my All-City Nature Boy that I’d converted from single speed, so I didn’t have the greatest bike, but I still got it done.”

Stoked to be part of such a diverse group, she was one of only two riders from the team to finish inside the cut-off when the team later took on the Unbound Gravel.

“That year it was only Anton [Krupicka] and me who completed it. He finished so early it was insane, and I was out there riding until something like 2am. I just kept pedalling. Arya asked me at the last stopping point if I was going to keep going and I said, ‘I didn’t do 150 for nothing, I gotta do the last 50!’”

Plans for 2021 are very much still up in the air with everyone doing their own thing for now. But Let’s Ride Cyclery, where Ortega is training to be a mechanic, runs a unique self-guided event called the Tourist Race. At 75 miles with 10,000ft of elevation, it’s no small feat, especially in March when rain and even snow is not uncommon. With some restrictions still in place due to the pandemic, entrants had the choice of riding in-person on 6th March or completing it solo any day until 20th March, and then uploading their results. 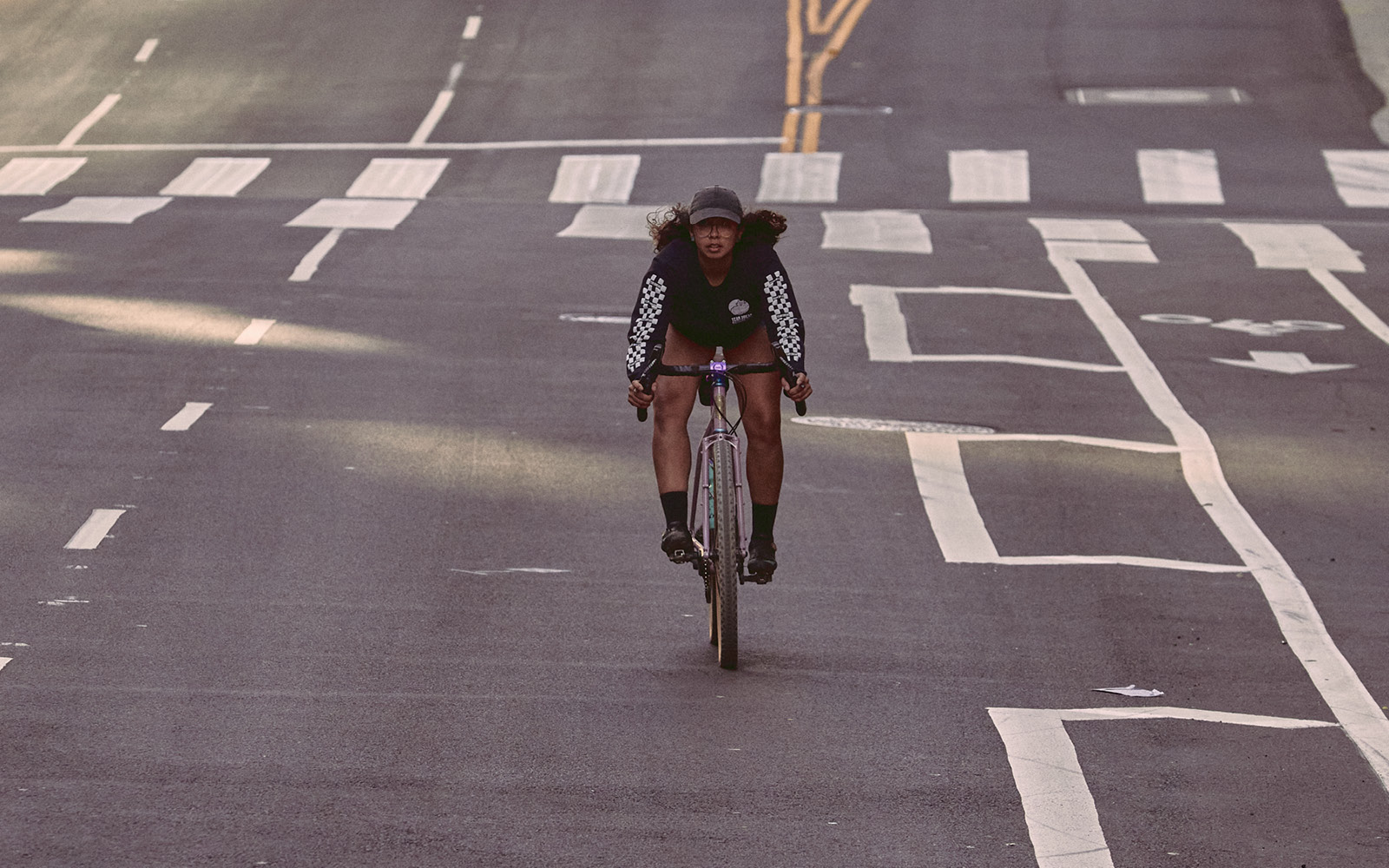 “Most people don’t really explore what’s on their doorstep, so the Tourist Race basically gets people out to locations that they might not have been to. Pre-Covid, you had to make your own route and work out how to get to each point, but this year is already a pre-course, so you just have to follow the route. It’s really hard though – one mountain to the next mountain and the next, then looping back. The race is really fun after the fact, not during!”

“I still commute everywhere, it’s my only way of getting from point A to point B. Then on my day off, I force myself to go out and ride for fun, even when my body’s exhausted after working six days out of seven.”

Though she isn’t working as a courier out in the field so much anymore, the bike is still the centre of Ortega’s world. Events like the Tourist Race feed her desire to explore and to have fun, even after a knackering week of work. 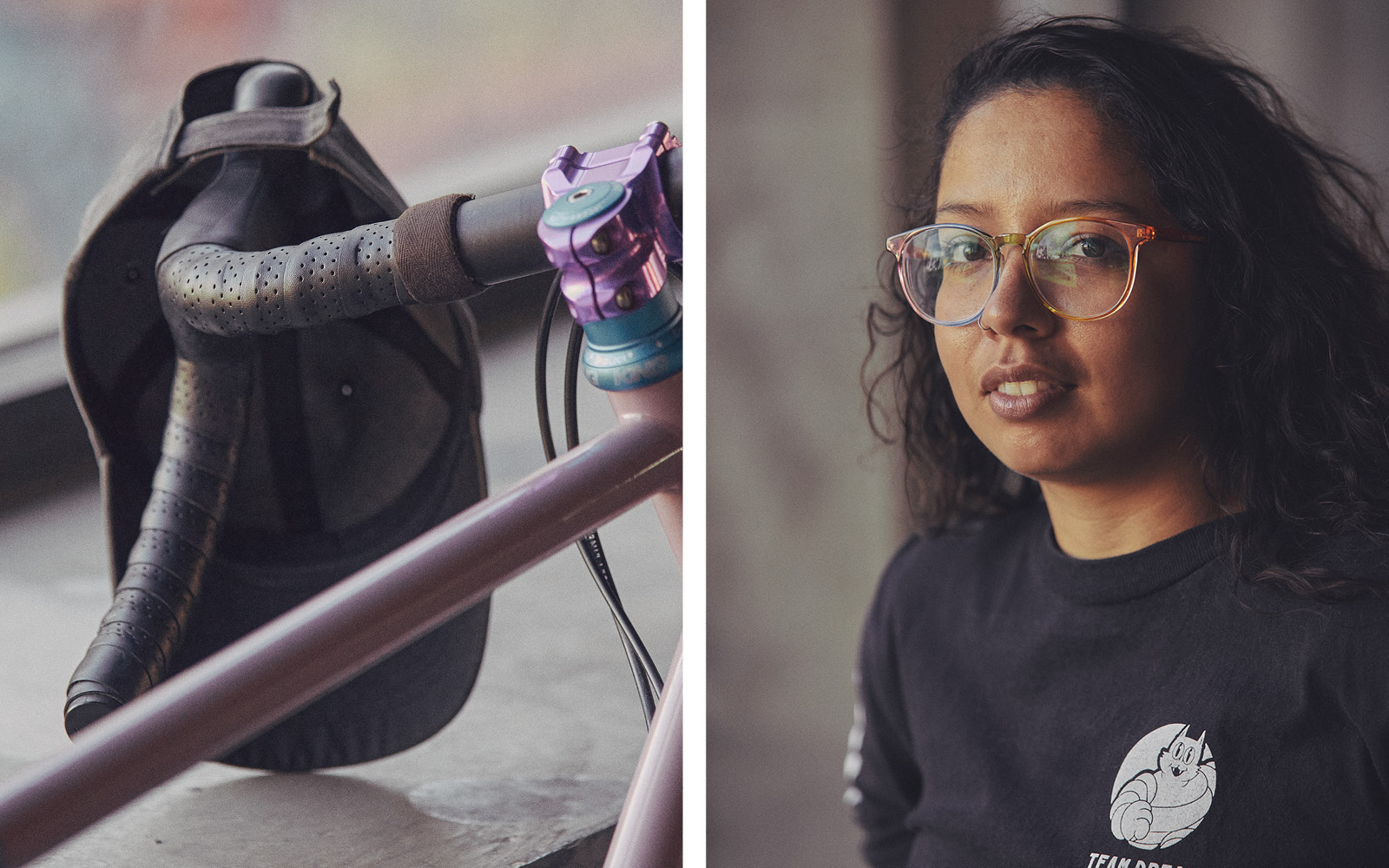 “I still commute everywhere, ride my bike everywhere, it’s my only way of getting from point A to point B. Then on the single day I have off, I force myself to go out and ride for fun, even when my body’s exhausted after working six days out of seven. Most of the fun rides that I do have a lot of climbing because I love mountain biking, and you have to go up to get back down.

“It’s just one of those things where your body’s tired but you still want to do something you love. I have it on my little calendar – it just says ride every Sunday. Just a quick reminder to get out there.” 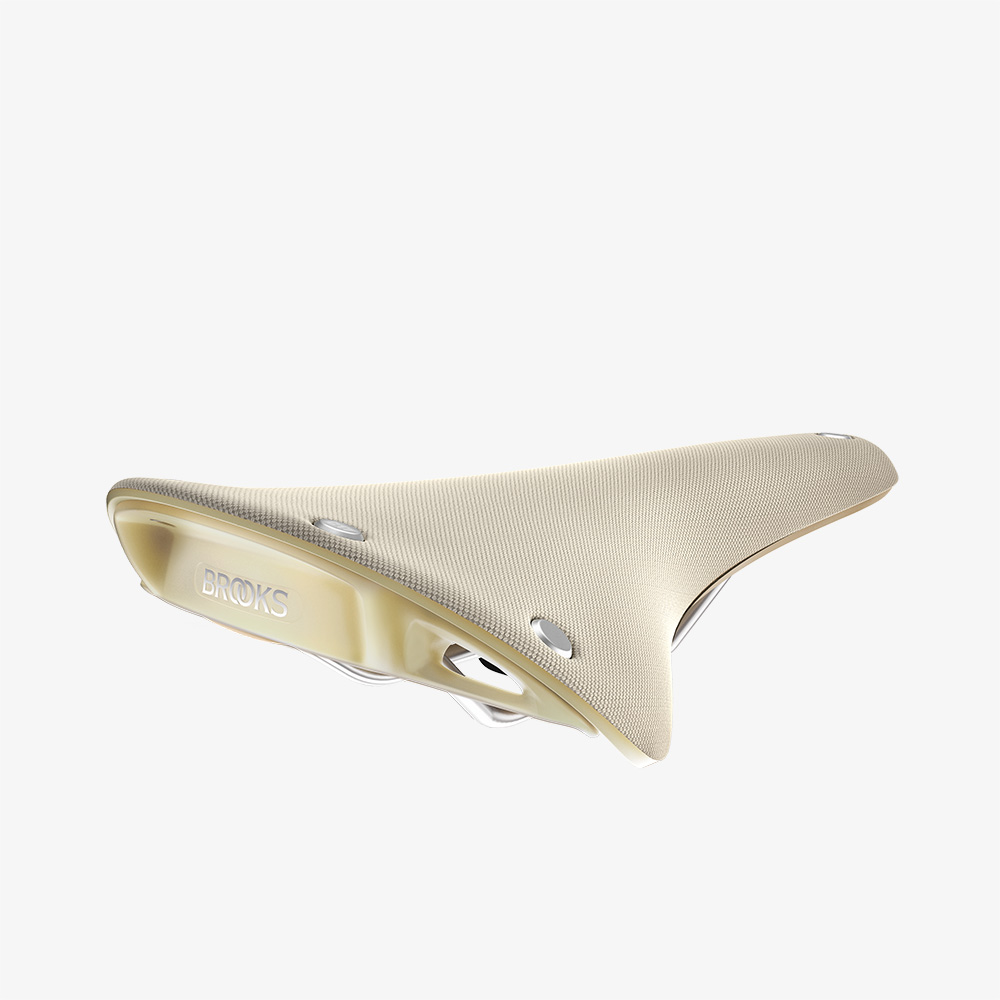 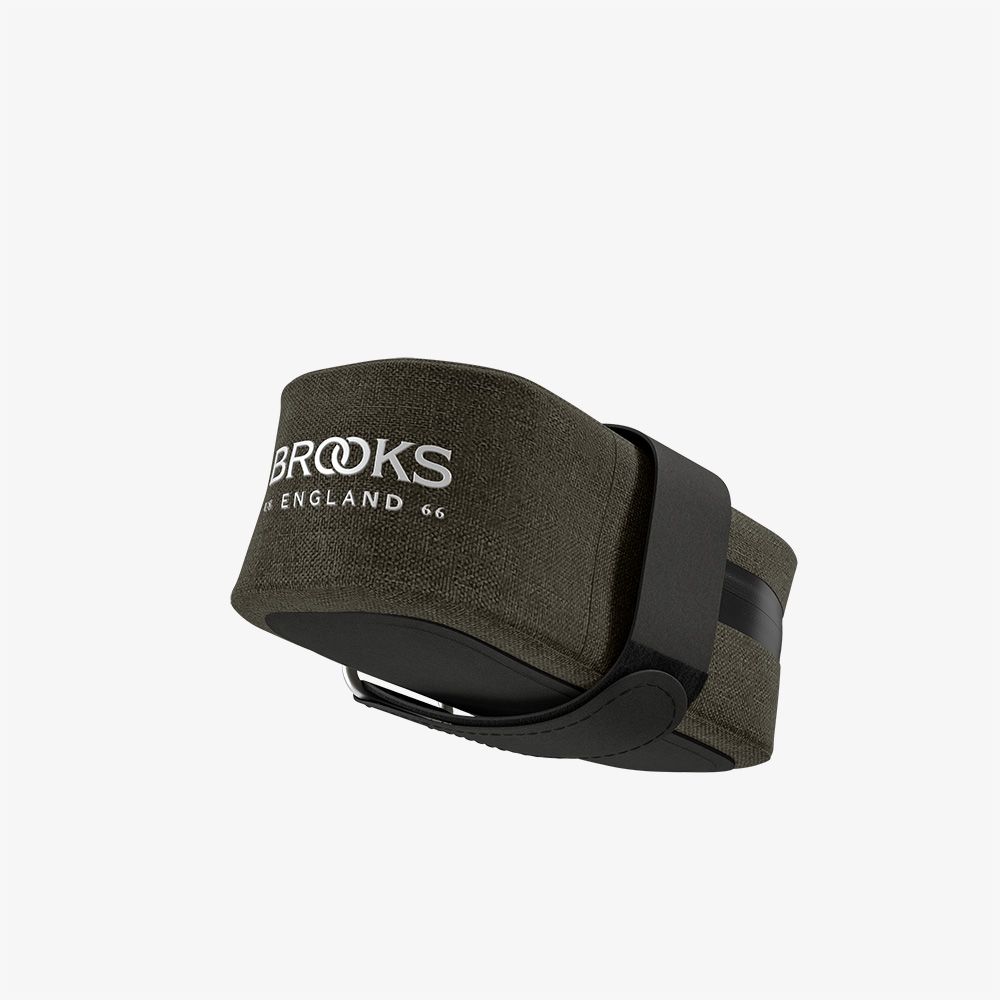 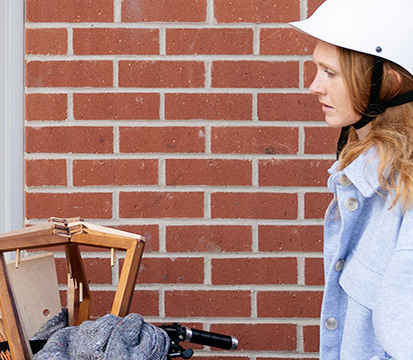 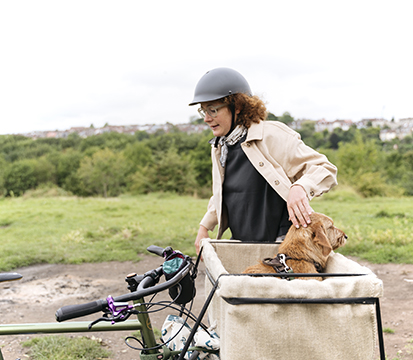 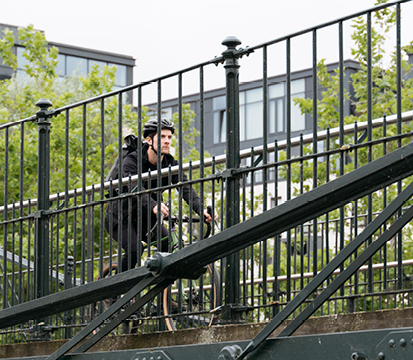